In the most difficult moments, some choose to stay and some run away. That’s also when you see what true friends are for.  ROLDA is a responsible charity that helps the abused and neglected animals in one of the poorest region of Romania. We don’t turn our heads when seeing a malnourished, or very sick animal suffering at the edge of the road. Why? Because we are the only hope he has, his only chance to stay alive with dignity. 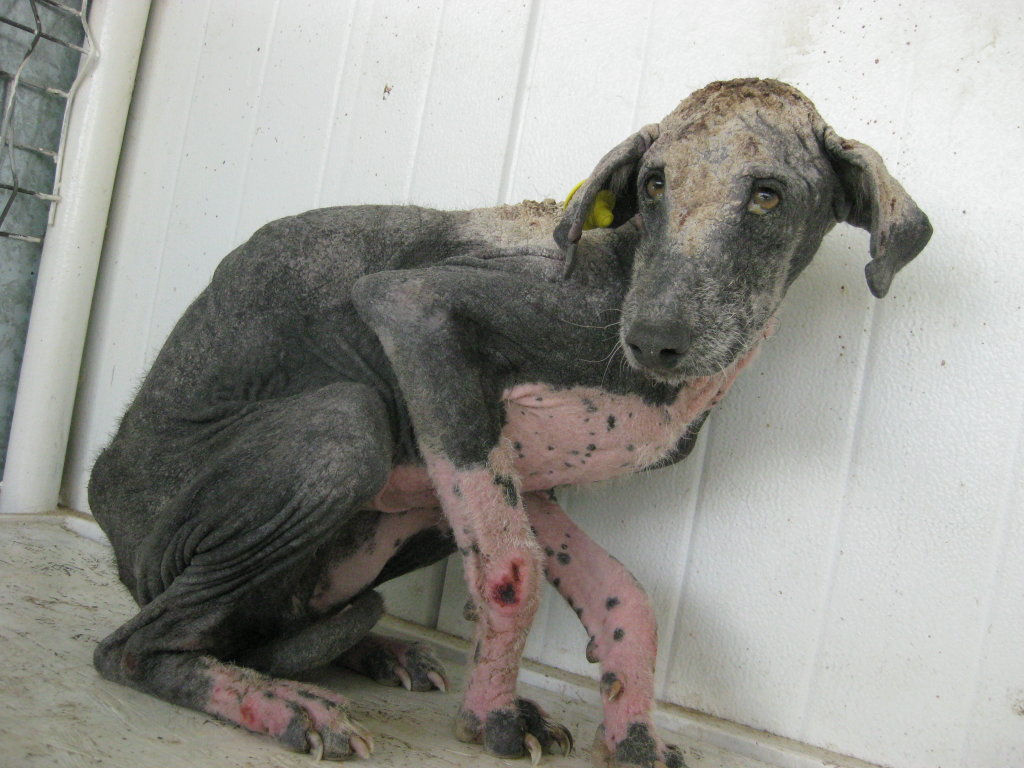 What chances this dog would have if we wouldn’t be there to give him hope?

I called him Nadie which means “No one” in Spanish. He had no one aside when we found him. The kids and even many adults were probably terrified to even look at him, many passed by either ignoring him “he is just a stray” …either exchanging comments like “he would be better put down” …while others find a reason to have fun “look what an ugly dog, that’s the worst I have seen”. 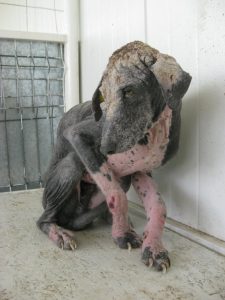 When I saw him, I froze. I couldn’t make any gesture and no thought came in my mind. I was in shock. By far, that was the worst case I have seen. The dog with worst skin problems I could have seen in my life. I have seen a lot in Romania and every time, I found the power to move on, tricking my mind with thoughts like “It’s not the worst case” or “The other dog had less chances but we saved him” etc

In Nadie’s case I knew from the beginning that’s the worst possible skin I ever seen. His body is full of infected skin (due to parasites and scratching), small parts of thicker skin (probably past infected skin which healed) lot of red skin and of course, no fur. The skin for around his head makes him look like a monster. He screams if you try to lift him from ground, we have to use special gloves or improvise from very soft blankets ways to move him to veterinary table, or back in his kennel.

Your donation matters!
Click below to learn more on how you can donate for Nadie or similar causes.

The courage doesn’t always mean a heroic brave act. For this dog in particular, and sadly for many others, the courage is the power to survive until the next day and after that, to continue.

My mind stops before even trying to comprehend this dog’ pain or from where comes this dog’ force to stay alive. The specialist opinion is that the way Nadie’s skin looks, it didn’t happen overnight. This dog suffered for weeks and weeks and her immune system, every cell of his body fight to stay alive and not die of general infection.

Together with the specialist, we decided to give Nadie’s a chance but there is one condition in this battle: in case his disease will re-appear, in case he suffers a chronic disease we will put him to sleep. There are chances that his liver will cease after the medicines we are going to administrate him for the next 3 months. I stay near him. I felt his breath. I know he wants to live, he is a fighter….He doesn’t have any more the power to do it alone.   And he needs us. He needs you and you …and yes, you too.

No dog should live the Nadie’s nightmare. No dog should end up in this health state. Together we can help Nadie be healthy again. Or at least give him one single chance.

I rarely start a rescue operation with the euthanasia option in my mind. I am a fighter, I feel the power given by hundreds of supporters who back me up and I know each stray we rescue is a fighter. Nadie is a special case. He is so fragile, so weak now …and from such a longtime, so alone…

Nadie has only one chance to live:

To be enough strong to resist a very intensive treatment (assuming we didn’t found him already too late and his disease is not chronic) or he will be put to sleep.

To be able to tell you his story, I spent some more time near Nadie. He eats well today, 2 little bowls of good food. He looks at you and quickly turns his head away: not in the mood for any “confrontations”. He is scared of strangers, but that’s not unusual. He is terrified to suffer more pain and already gave up scratching – all over, his body is marked with past wounds or new bleeding spots. I don’t think he gave up fighting.

I am asking you today to make a small or large donation to help Nadie, the dog who had no one and now, has only one chance. Help me keep a promise made from heart for an amazing dog.  I aim to send you an update with Nadie so transformed that you will hardly be able to recognize him.

I left him today in a kennel placed outside, where air is ventilated. I don’t know if I will find him tomorrow alive. Before leaving I made him a promise: I will not abandon him, I will not let him die. Nadie needs special diet food, antibiotics, combined with different skin treatments for the next 3 months, before we will see an improvement. It takes patience, lots of money and luck. 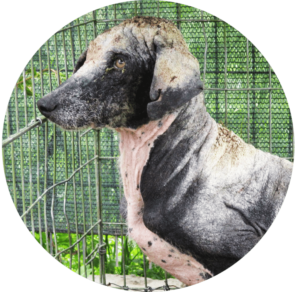 Will you join me helping Nadie, the dog who had no one and has only one chance to stay alive out of pain and with dignity?

He has no one to rely on except you.

Become a sponsor for one of our 700 dogs.

By continuing to browse or by clicking "Accept Cookies" you agree to the storing of cookies on your browser (1st or 3rd parties) for statistical and marketing purposes. We use these cookies to analyze and improve your user experience and assist in our marketing efforts.

When you visit any web site, it may store or retrieve information on your browser, mostly in the form of cookies. This information might be about you, your preferences or your device and is mostly used to make the site work as you expect it to. The information does not usually directly identify you, but it can give you a more personalised web experience.

Because we respect your right to privacy, you can choose not to allow some types of cookies. Click on the different category headings to find out more and change our default settings. However, blocking some types of cookies may impact your experience of the site and the services we are able to offer.

These cookies are necessary for the website to function and cannot be switched off in our systems. They are usually only set in response to actions made by you which amount to a request for services, such as setting your privacy preferences, logging in or filling in forms.

You can set your browser to block or alert you about these cookies, but some parts of the site will not then work. These cookies do not store any personally identifiable information.

These are the types of cookies that are necessary in order to be authenticated to our website. You cannot authenticate without agreeing to store these cookies. You can set these later on.

These cookies allow us to count visits and traffic sources so we can measure and improve the performance of our site. They help us to know which pages are the most and least popular and see how visitors move around the site.

All information these cookies collect is aggregated and therefore anonymous. If you do not allow these cookies we will not know when you have visited our site, and will not be able to monitor its performance.

These cookies may be set through our site by our advertising partners. They may be used by those companies to build a profile of your interests and show you relevant adverts on other sites.

They do not store directly personal information, but are based on uniquely identifying your browser and internet device. If you do not allow these cookies, you will experience less targeted advertising.

An HTTP cookie (also called web cookie, Internet cookie, browser cookie, or simply cookie) is a small piece of data sent from a website and stored on the user's computer by the user's web browser while the user is browsing. Cookies were designed to be a reliable mechanism for websites to remember stateful information (such as items added in the shopping cart in an online store) or to record the user's browsing activity (including clicking particular buttons, logging in, or recording which pages were visited in the past). They can also be used to remember arbitrary pieces of information that the user previously entered into form fields such as names, addresses, passwords, and credit card numbers.